This blog is currently inactive. I have a small babe and a book manuscript under review so time is precious. See you on the other side.

Filed under Posts of an unqualified kind

Australian feminism and some recent stuff

Hey, so apparently I’m one of Australia’s up and coming feminist icons! No really, in all seriousness, thank you to SBS for including me in their International Women’s Day 2016 feature. It was an honour to be asked and genuinely flattering (humbling? I’m terrible with English emotion terms!) to feature alongside such inspiring, admirable women.

Below are some of the interview questions and answers in more detail followed by an addendum of sorts. END_OF_DOCUMENT_TOKEN_TO_BE_REPLACED

Geertzian moments (or, ‘when ethnographers lose their shit’)

Returning home from hunting on our Husband’s country, fieldwork (2008)

There are certain moments during fieldwork that anthropologists refer to as ‘Geertzian moments’ or sometimes ‘Geertzian cockfight moments’. These are pivotal moments when something in one’s disposition and social relations shifts dramatically. Often it’s a moment of losing oneself and behaving in a way that one wouldn’t have expected or couldn’t anticipate, and it’s not until afterwards when you pause and reflect that you realise what has just occurred. It is in that moment of reflection that the ethnographer realises they’ve reached some tipping point of enculturation. This tipping point, in turn, changes the way that the ethnographer is perceived and treated. You become less of an outsider and start to be considered and treated more like ‘one of us.’ In this sense, there’s an element of intimacy and trust involved and I suspect this is because so-called ‘Geertzian moments’ are often triggered by some stressor and the ethnographer’s response often leaves them vulnerable or exposed in some way.

To give you a sense of Geertz’s now classic ‘moment’, the following is an excerpt from ‘Deep Play: Notes on the Balinese Cockfight‘. It begins with Geertz and his wife accompanying their extended family to a cockfight in Bali. Cockfights are illegal in Bali, the police stage a raid, and so it begins . . .

‘On the established anthropological principle, When in Rome, my wife and I decided, only slightly less instantaneously than everyone else, that the thing to do was run too. We ran down the main village street, northward, away from where we were living, for we were on that side of the ring. About half-way down another fugitive ducked suddenly into a compound-his own, it turned out-and we, seeing nothing ahead of us but rice fields, open country, and a very high volcano, followed him. As the three of us came tumbling into the courtyard, his wife, who had apparently been through this sort of thing before, whipped out a table, a tablecloth, three chairs, and three cups of tea, and we all, without any explicit communication whatsoever, sat down, commenced to sip tea, and sought to compose ourselves . . . .

The next morning the village was a completely different world for us. Not only were we no longer invisible, we were suddenly the center of all attention, the object of a great outpouring of warmth, interest, and, most especially, amusement. Everyone in the village knew we had fled like everyone else. They asked us about it again and again (I must have told the story, small detail by small detail, fifty times by the end of the day), gently, affectionately, but quite insistently teasing us: “Why didn’t you just stand there and tell the police who you were?” “Why didn’t you just say you were only watching and not betting?” “Were you really afraid of those little guns?” As always, kinesthetically minded and, even when fleeing for their lives (or, as happened eight years later, surrendering them), the world’s most poised people, they gleefully mimicked, also over and over again, our graceless style of running and what they claimed were our panic-stricken facial expressions.

But above all, everyone was extremely pleased and even more surprised that we had not simply “pulled out our papers” (they knew about those too) and asserted our Distinguished Visitor status, but had instead demonstrated our solidarity with what were now our covillagers. (What we had actually demonstrated was our cowardice, but there is fellowship in that too.) Even the Brahmana priest, an old, grave, half-way-to-Heaven type who because of its associations with the underworld would never be involved, even distantly, in a cockfight, and was difficult to approach even to other Balinese, had us called into his courtyard to ask us about what had happened, chuckling happily at the sheer extraordinariness of it all.’

END_OF_DOCUMENT_TOKEN_TO_BE_REPLACED

A poem for my Grandmother

Rest in Peace Bing, my paternal Grandmother, who passed away peacefully on Saturday just gone. I will always remember her at her happiest on the farm in the early morning. The gentle quiet and the birds. All my love. END_OF_DOCUMENT_TOKEN_TO_BE_REPLACED

I cringed reading certain parts of this (see, ‘she makes things grow by magically extending motherhood’ and ‘she internalises them as a woman does a child’), but the narrative itself is super interesting and richly layered. There are elements that remind me of a lot of The Djan’kawu actually – a Yolŋu creation narrative that recounts the exploits of a man and two sisters as foundational ancestral figures for the Dhuwa moiety.

‘The Gimi of Papua New Guinea exchange sisters in marriage, and these dual ceremonies ideally take place at the same time as the initiation of their adolescent brothers. Before their marriage, the pairs of future sister-in-law are secluded inside the house of the mother of one of them, and, while being deprived of food and sleep, they are taught the songs and incantations necessary for successful gardening and the raising of pigs. The women pile wood onto the fire in the centre of the hut and tell the girls that the heat will make them sweat and remove their menstrual blood. Women’s gardening and pig-rearing songs are related to their myths, and to their ‘Blood’ and ‘Moon’ songs that they sing to bring their periods to a close. During the initial phases of the initiation and the rites of marriage, a girl receives spells and songs from older women. These food spells are secret and shared only between classificatory mothers and daughters, and between the mothers-in-law and daughters-in-law (Gillison, 1993: 155-9).

Production and reproduction are linked in Gimi philosophy because a woman is thought to be able to transform her life-force (auna) into food over time. She sends her auna into plants and animals through a repetitive process of singing, talking, cajoling and caressing. In a sense, she makes things grow by magically extending motherhood into other objects. Through songs and chants, a woman joins her auna with that of the plan or animal, and internalizes them as a woman does a child. But her power to make things grow, to conceive a child, originates in the source of her auna, that is, in her menstrual blood (ibid.: 199-201). Thus a woman’s body and its reproductive potential are imagined in relation to specific sets of social and productive relationships. END_OF_DOCUMENT_TOKEN_TO_BE_REPLACED

The way value inheres: Yolŋu riŋgitj and its relationship to Malay ‘ringgit’ 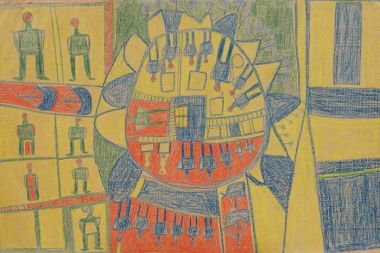 There are many loan words from Malay and other Austronesian languages in the Yolŋu languages of east Arnhem Land (see Evans 1992). These derive from pre-colonial exchange relations between Yolŋu people and seafarers from the port of Macassar (now Ujung Pandang) in Sulawesi. Collectively referred to as ‘Maŋgatharra’ in Yolŋu-matha, these seafarers made the annual voyage to Arnhem to collect trepang and engage in broader exchange relations with Yolŋu people.† A number of Yolŋu people also accompanied Maŋgatharra on return voyages to the Port of Macassar, as evidenced by oral history and art work such as that pictured above.

Among this body of loan words is the Yolŋu-matha term riŋgitj, derived from the Malay term ringgit, meaning ‘jagged’ and originally used to refer to the serrated edges of silver Spanish dollars which circulated widely in the region during the 16th and 17th century. Today, of course, ringgit refers to the national currency of Malaysia. (It was officially adopted as the name of their currency in August 1975.) END_OF_DOCUMENT_TOKEN_TO_BE_REPLACED

wäwa walala,
all [our] brothers

waku walala,
all [our] children

Gikal-wu,
and [place name (where we gather these shellfish)],

for the sandflies (our mother’s mother).

It was so special to be back with my family in camp. The audio in that clip could be louder. Apologies. Just turn it up. Please note also that the kinship terminology is translated as per female ego – waku for instance, is actually ‘woman’s child, sister’s child’ (as opposed to gathu, man’s child, brother’s child’).

Notes Toward a Critique of Autonomy: A talk from the Sydney Anarchist Bookfair

Below is a talk I gave at the Sydney Anarchist Bookfair earlier this month, Notes Toward a Critique of Autonomy. It’s ‘notes toward’ because it is not a polished synthesis/analysis, but more in the spirit of throwing ideas out there.

Thanks to the organisers of the bookfair, including Jura Bookshop and Black Rose Anarchist Library, for having me. It was such a fantastic event, full of interesting and challenging ideas.

View this document on Scribd

Sexy Hot Damn Anthropology: A Feminist Manifesto for the Study of Capitalism 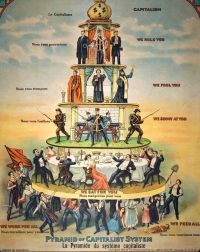 It’s true that I often get excited by anthropological theory, but it’s rare that I am this excited and impressed. If you haven’t yet come across ‘Gens: A Feminist Manifesto for the Study of Capitalism’ by Laura Bear, Karen Ho, Anna Tsing and Sylvia Yanagisako, then I highly recommend it.

Gens here refers to ‘a collective with feminist ancestry for the study of capitalist inequality.’ The manifesto is published in Cultural Anthropology as part of their Generating Capitalism series. The manifesto begins as per below: END_OF_DOCUMENT_TOKEN_TO_BE_REPLACED

I was thinking about categories of types of people/relations’ the other day, as in English we have family, friends, colleagues, team-mates etc. etc., and as my brain is oft want to do started thinking of the Yolŋu matha equivalents or comparisons – of ‘categories of types of people and relations.’ I was surprised to realise that there are so few (although more in a sense).

Reproduced below is a list of categories of types of relations in Yolŋu matha. It is probably not exhaustive, but a list of all those that I could think of at the time:

Gurrutu is the ‘main category’ of types of relations, for want of a better description. The term gurrutu is generally translated as ‘kin[ship]’. The Yolŋu kinship system is universalistic or ‘classificatory’, which means that everyone in the Yolŋu social world is and relate to each other as kin. But while it is all encompassing in this sense, there are many different ‘types’ of reciprocal kin relations within it. END_OF_DOCUMENT_TOKEN_TO_BE_REPLACED